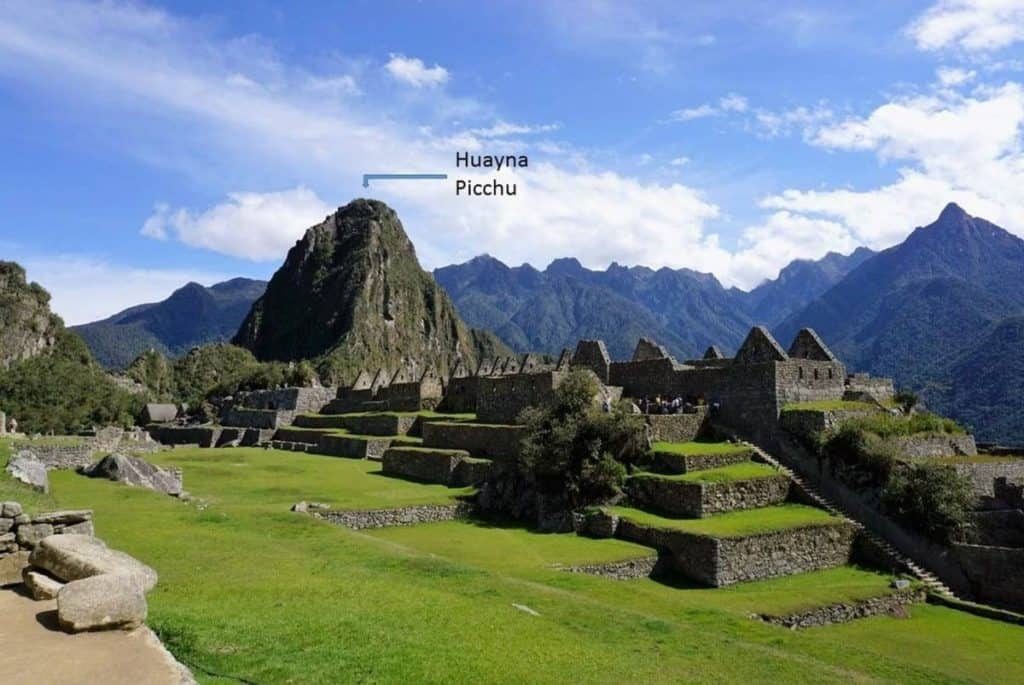 Not wanting to sound dramatic, but Huayna Picchu really is the most dangerous and difficult hike I’ve ever done. I have to say that I honestly didn’t know what to expect regarding the hike when we booked our trip to Machu Picchu in Peru. Often confused, the hike to Machu Picchu and the hike to Huayna Picchu are different. Huayna Picchu is another mountain that overlooks Machu Picchu. The country only allows 400 people a day (two separate times of 200 each) to do the hike, so it’s something you need to book ahead of time. They offer two entrance times of 8 am, or 10 am. Our hike began at 10 am.  We decided to do the Huayna Picchu hike first and then had a guide in the afternoon for Machu Picchu itself. 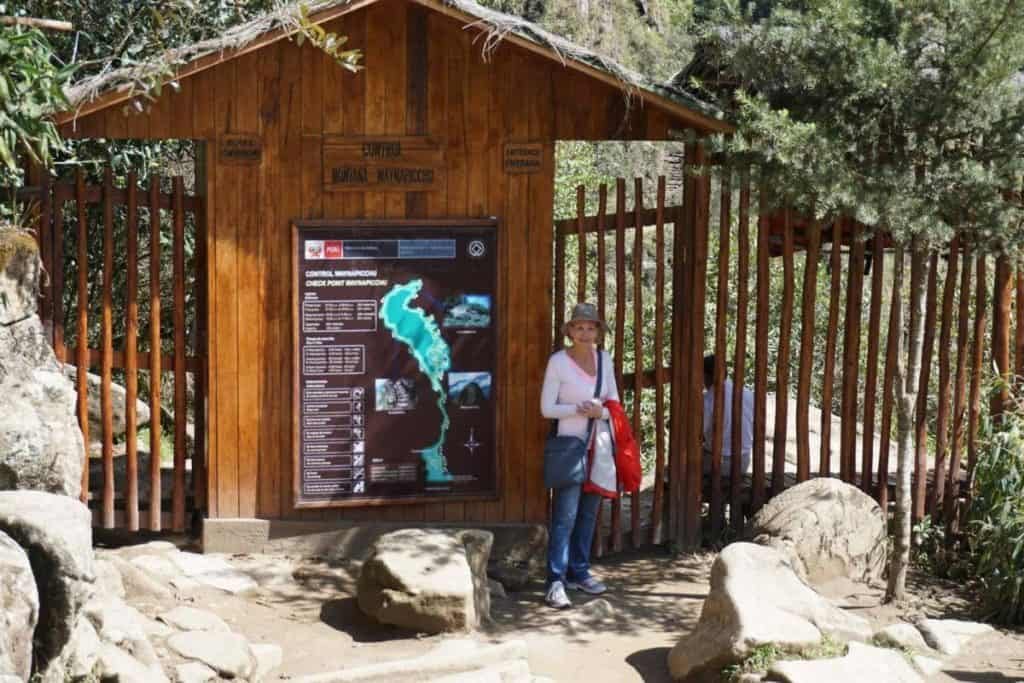 When we arrived at the entrance gate, we looked up at the mountain and saw the tiny people from the first group still going up.  At this point, I realized just how steep the mountain was. But with my backpack loaded with camera gear, raincoats and lots of water, we were ready.

They opened the gate about 10 minutes early. The line entering moved very slow because you had to show your ticket and sign a log book. Then when you return, you have to sign out. The park officials have this process in place so they can know if they lost anyone. Not really inspiring. At the same time, I heard some of the guides talking about how a man fell off the cliff a couple of months ago and died. Now I’m questioning whether I can even do this. What I didn’t mention earlier is that I’m not exactly comfortable with heights. I get shaky going up a glass enclosed elevator outside of a tall building. 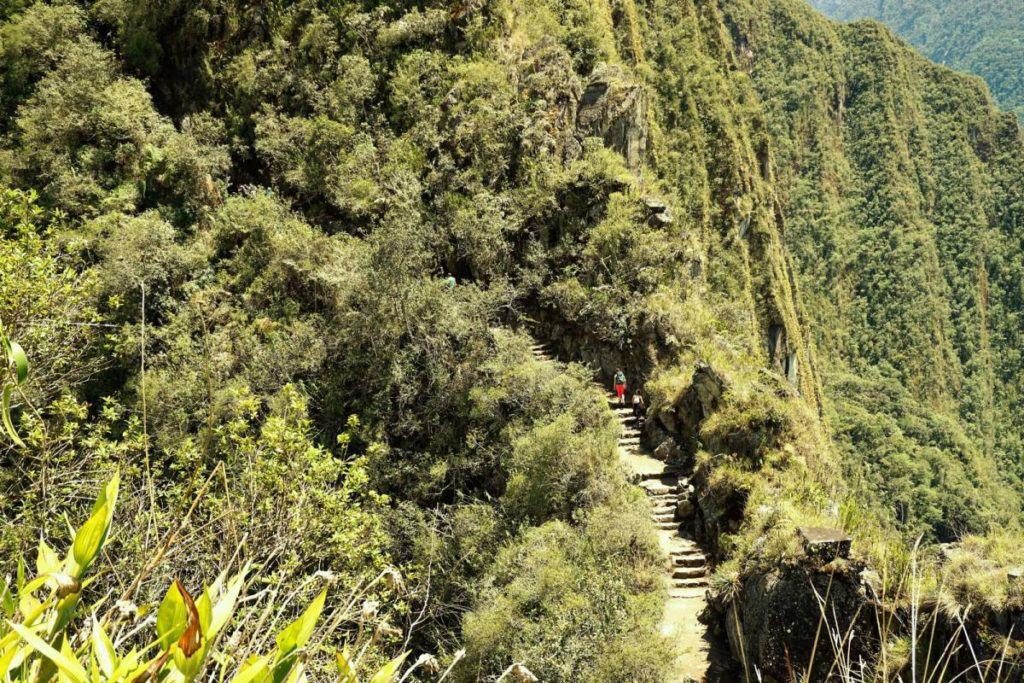 Go Down to Go Up?

We signed in and went through. The first discouraging sight was that the beginning of the trail went downhill. I’m thinking why are we going down when we ultimately have to go up. But who am I to second guess the Incas who created this path hundreds of years ago.

After about 15 minutes of walking down, we finally started our ascent. The trail, made of carved stones are about 2 feet wide. But as we went along, we discovered that wasn’t the case everywhere. We came to parts that didn’t seem to have anything but just the rocks to walk over. And at times, the path was only a foot wide. There were places we were climbing with all fours like going up a ladder on the rocks because of the steep incline. We had to stop on many occasions to drink some water and give the quads a rest. A couple of times I wondered if I could continue. But I wanted that coveted picture from the top overlooking Machu Picchu, so I moved on. 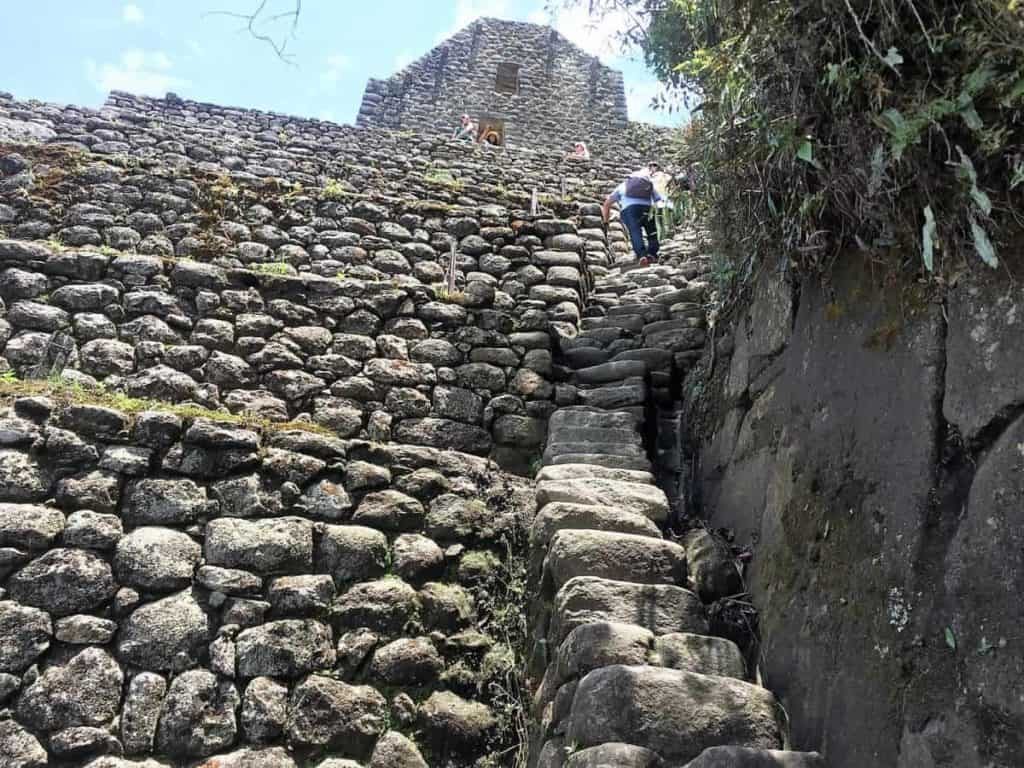 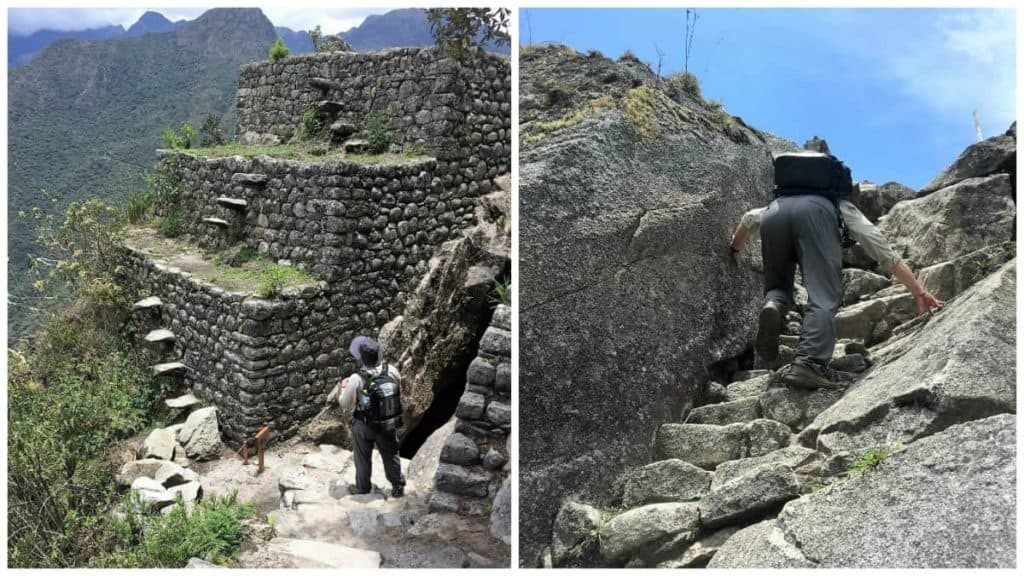 When the First Group Meets the Second

About half way up we started encountering people from the first group who were coming back down. This made the hike even more challenging as you had to squeeze by each other and if you were the one on the outside of the rock wall, you had nothing to help balance yourself. I had people grab me for support as we passed each other. Sections of the path are extremely narrow. Too narrow for two people to pass by. So you have to wait for the path to free up before proceeding.

Good thing it wasn’t raining, and the bugs weren’t biting, or it would have made the hike even more challenging. The trails weren’t marked to let you know how far you’ve gone so a few times I asked those coming back down how much longer it was to the top. And every time the answer was 20 minutes.  So after the third 20-minute answer, I stopped asking. 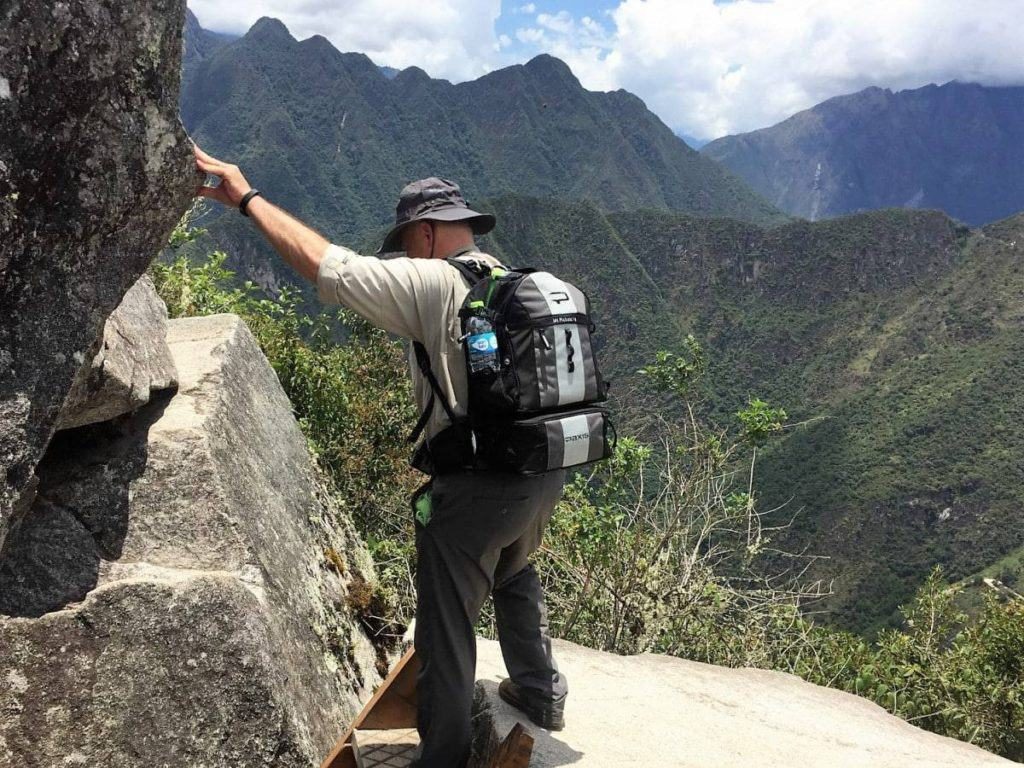 My Near Death Experience

While the entire hike was a little scary, there was one time, I had a brief near-death experience that taught me a good lesson. Always make sure you cinch your backpack straps down tight. At one point I was climbing a steep and narrow path on all fours. I twisted around to see where my wife was and my backpack shifted to the left and almost pulled me over the cliff. I immediately stopped and pulled down tight on the straps. 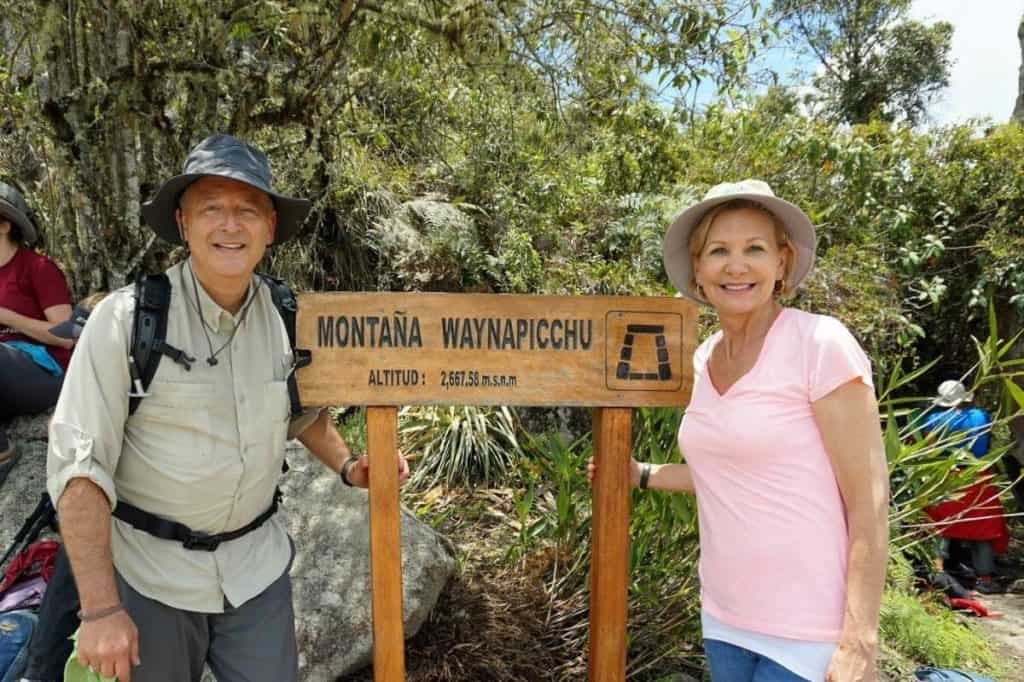 It took us a little over an hour to make it to the top. Yes, we did it. And the view was exhilarating. Not to mention the joy I felt in accomplishing this. We spent about 20 minutes exploring the top, and the last thing to do is to get that great picture out on an overhanging rock overlooking Machu Picchu. After taking the picture, we started heading down a one-way path. I thought that going down was going to be so much easier and that we could do it in half the time.  But alas, not so. 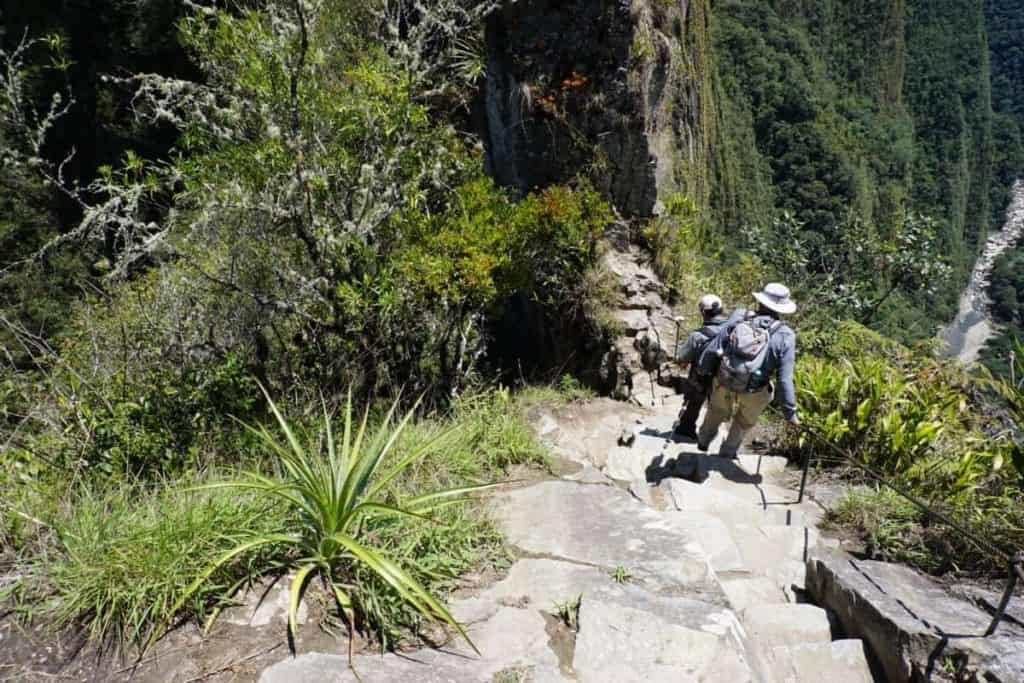 After about 5 minutes of heading down a one-way path, we came to spot where we didn’t know where to go. You would think the trail would be visible. Just ahead was this hole in a rock. I didn’t realize it was a cave at the time. But that was the path. You had to squat down and walk hunched over to get through it. And entering it was dark, but I could see water on the ground. Because of the puddles, I had to crawl all the way through in a crouching position to avoid getting my pants wet.

Once through the cave, a stone path appeared with downward steps. As we went down, we encountered some people still coming up, so it slowed our descent. I also learned that going down at times was just as hard as going up, as my quads fatigued equally. And the danger at times was even more because gravity pulls you downhill and you don’t always want to go down fast. So keeping yourself from flying down the hill takes leg muscles. Resulting in almost as regular of rest stops as on the way up. 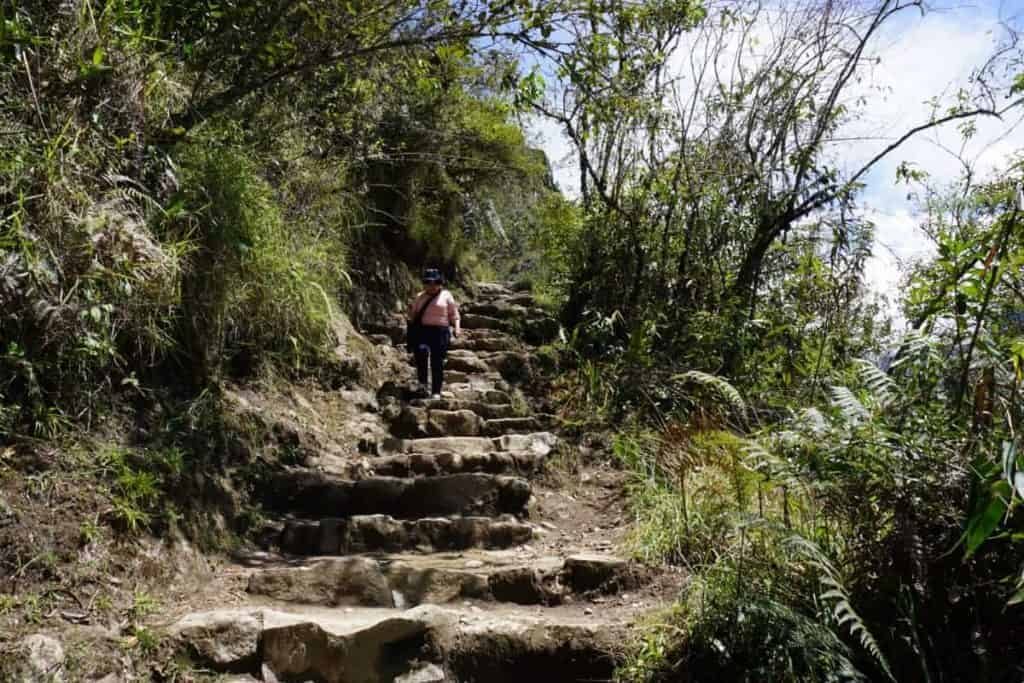 As we finally started that climb back up, we knew we were close to the exit. Huayna Picchu doesn’t let you forget her with that last 15-minute climb back uphill. Arriving at the gate, we sign back in alerting the officials that we didn’t fall off the cliff or that we became too tired to make it back out. Returning to the entrance and looking at the mountain, it was amazing that just 2 ½ hours earlier, we were looking up wondering if we could even complete this difficult hike. We have the iconic picture and crossed off another item on our travel bucket list. Was it the most dangerous and difficult hike I’ve ever done? Yes, it was, but it was worth it. 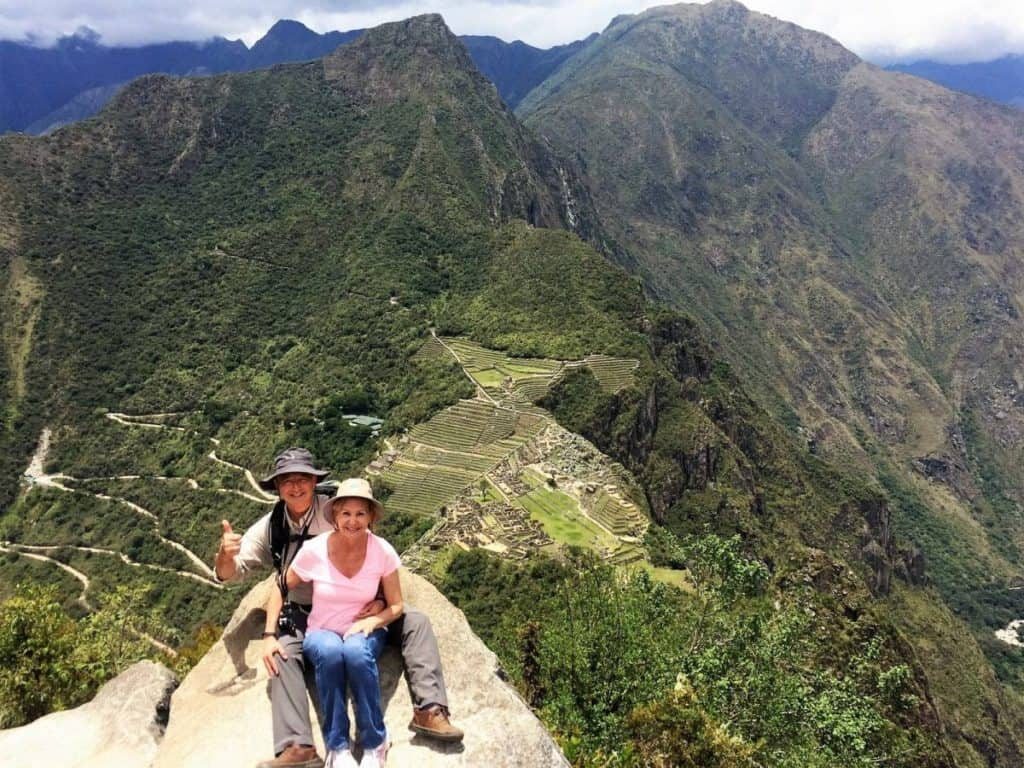 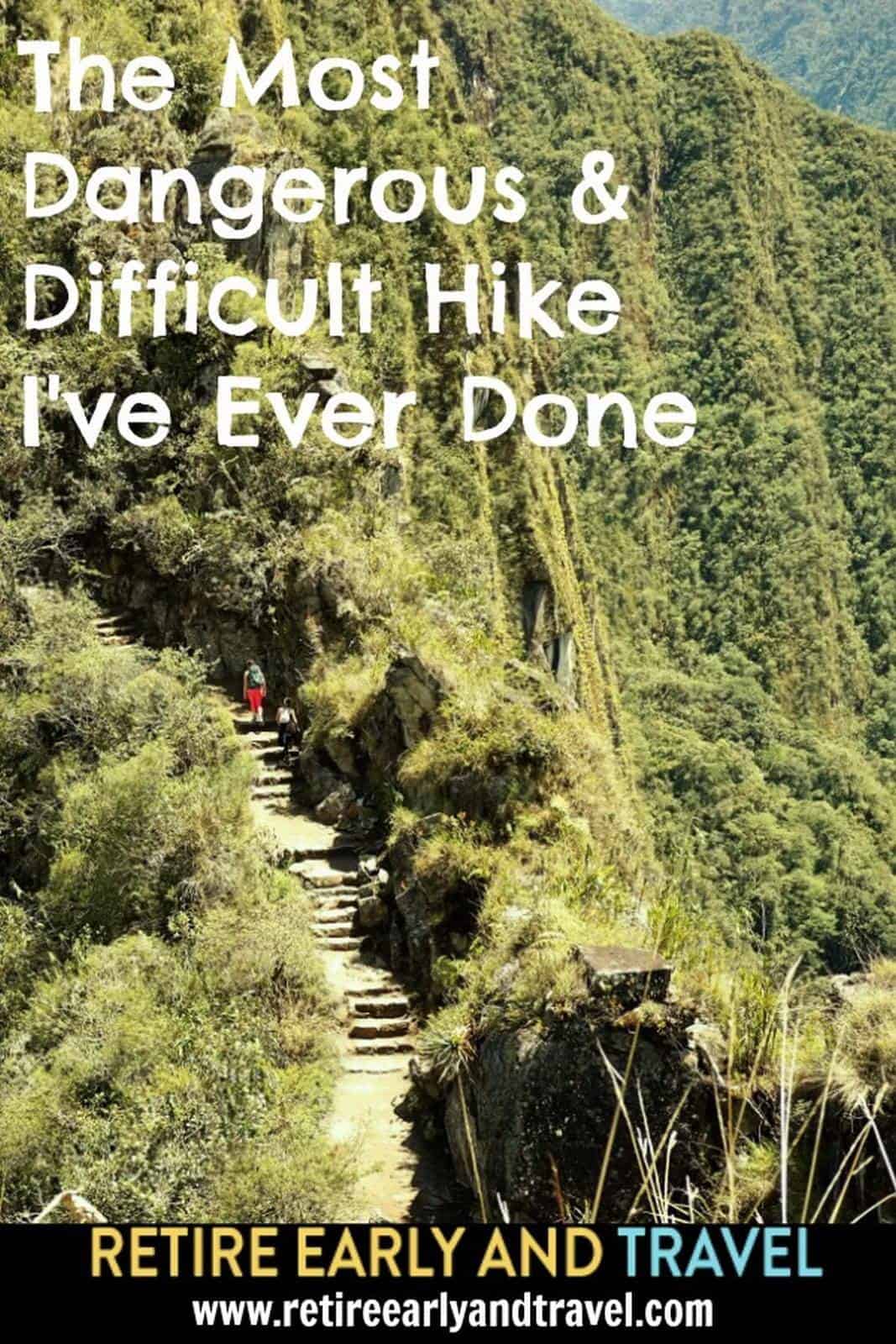