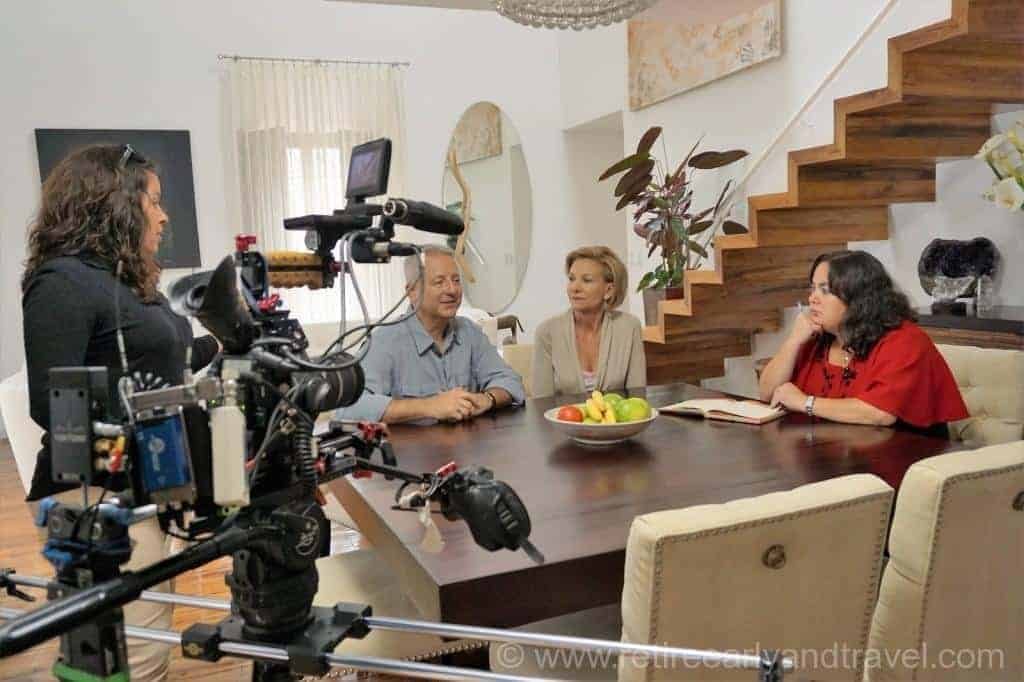 Day one of House Hunters International filming is here. HHI always starts with the couple arriving at a hotel. We needed to look as if we just checked in. Our first day began at Mansion Alcazar, a restored colonial Mansion, converted into a luxurious boutique hotel. We did have the option of staying there, but we would have had to be ready before 7 am so that housekeeping could clean and the camera man could set up. We opted to stay at home and arrive at 8. They asked us to have one suitcase with some clothes in it.  The first half of the day we shot 4 hours of interviews. They cut and used this footage in many places throughout the show and not necessarily in context or order. 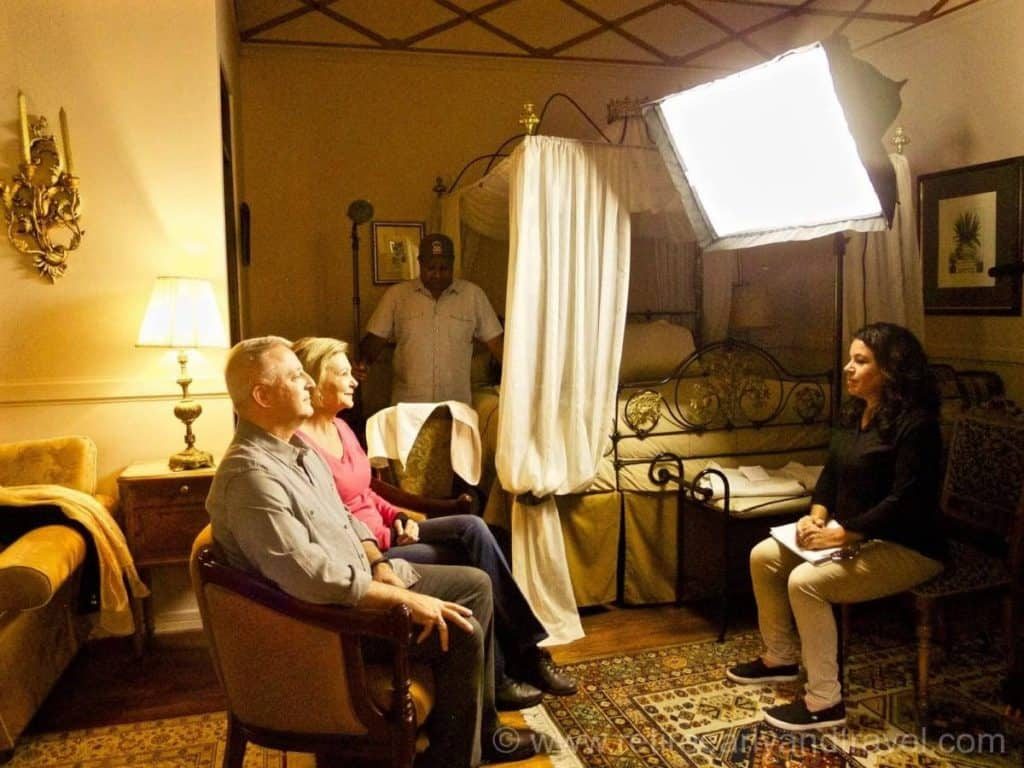 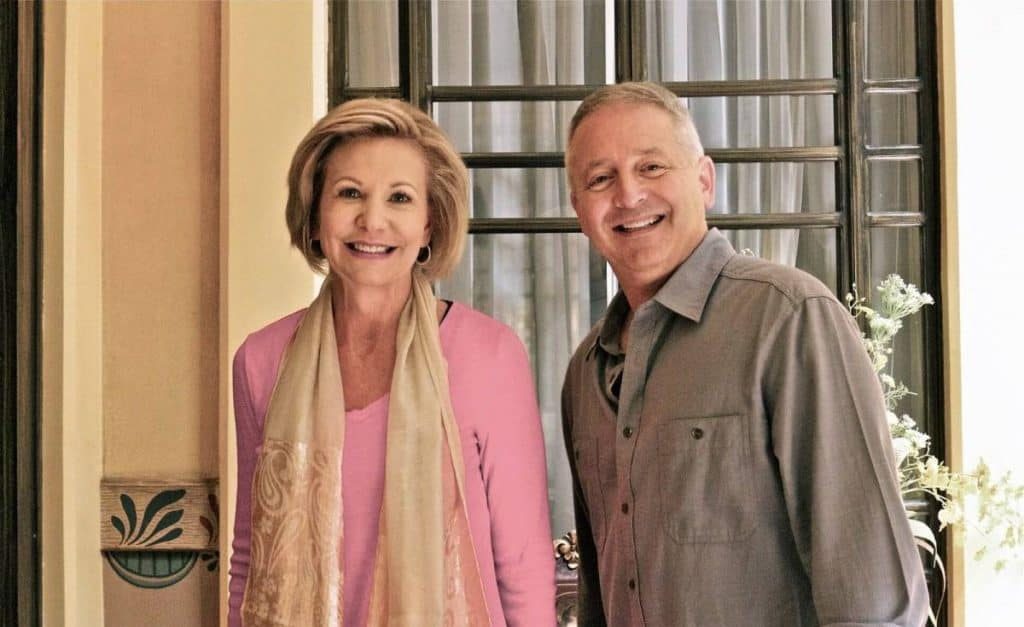 Next, we were directed to go to the front desk and asked the hotel clerk if there was a place we could book a carriage ride. Keith and I looked at each other and said, “there are no carriage rides in Cuenca,” to which our House Hunters International filming director said, “there is now.” From there they shot footage of us talking about how excited we were to be moving to the charming city and looking at a map. 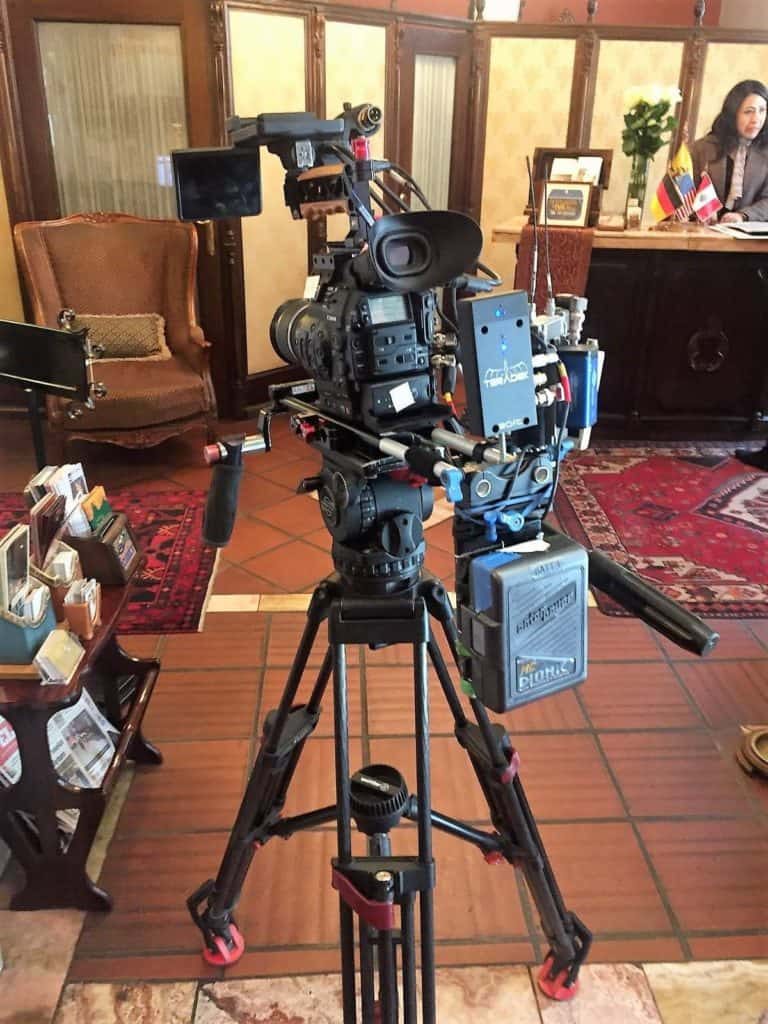 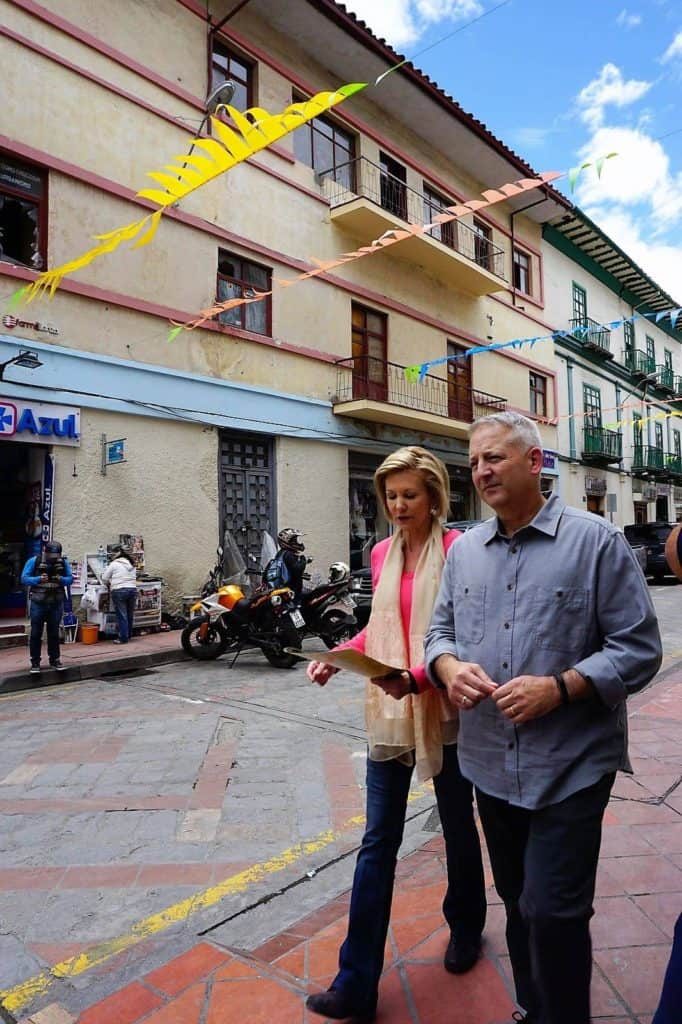 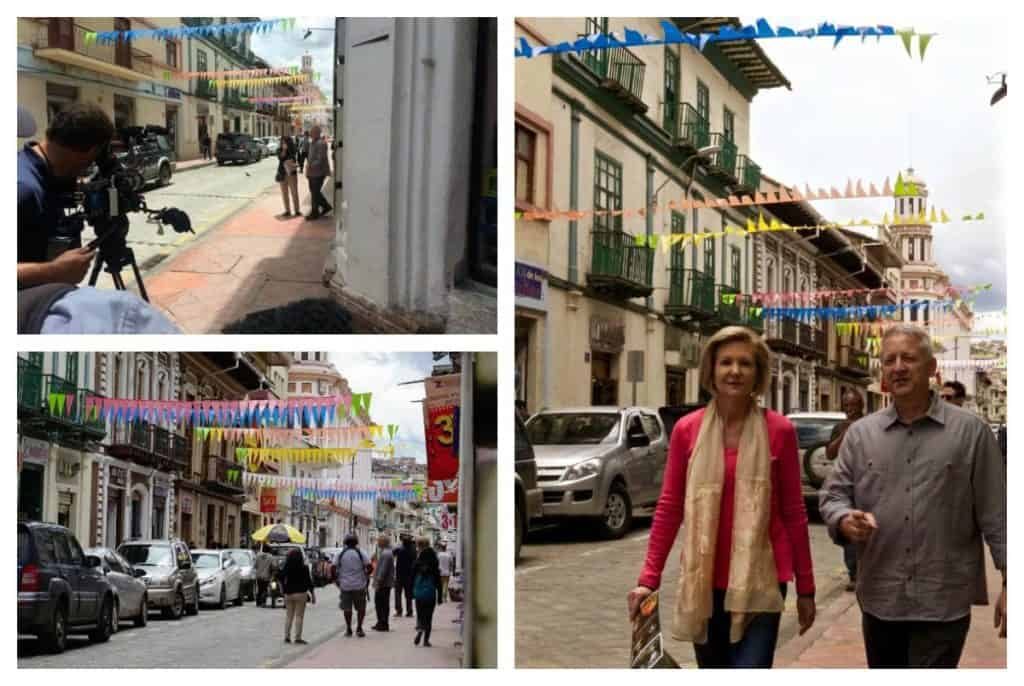 After lunch, we met with our realtor, Sole. The office where we met her was actually our friend Ashley’s beautiful loft home, not a realty office. Ashley was also the fixer (local expert) for this episode. Sole was not the actual realtor we used when we rented our apartment. HHI liked her because she's an Ecuadorian who speaks English. They also asked her to wear something Ecuadorian. Sole has been the realtor for previous episodes filmed in Cuenca and has never watched even her episodes of the show. HHI does not air in Ecuador.

In the show, we said that apartment one was about a 30-minute walk to the city center, but It was, in reality, more like 45 to 50 minutes. It was small and old. There was a propane tank in the kitchen to supply gas to heat the hot water (they did not show that). It had an Asian theme. We didn't like the home at all but we couldn't make it sound too obvious for the show. In reality, it was an Airbnb.

We did the House Hunters International filming at the apartment we live in now on day two. Our apartment needed to be empty or close to empty so that we could re-create how it looked before we moved in. At 7 am movers arrived and started packing and moving anything that was not in a cupboard or closet. You will notice in most episodes that the couples never open the cabinets or closets. The movers had a truck on the curb that they were going to move all our furniture into, but we talked them into leaving it in the apartment building hall where they left a mover to watch over it the entire time. Stressful does not begin to describe this day.

Late in the day on day two we filmed the scene with the indigenous healer. It hurt when she hit us with those herbs. Many people believe in these healers. There was a healer just down from us who had a line of over a dozen women with their sick babies. We also, on a whim tried the fried plantains from a street vendor. That was not on the schedule for the day, but the Director of the House Hunters International filming thought it would make a good scene. 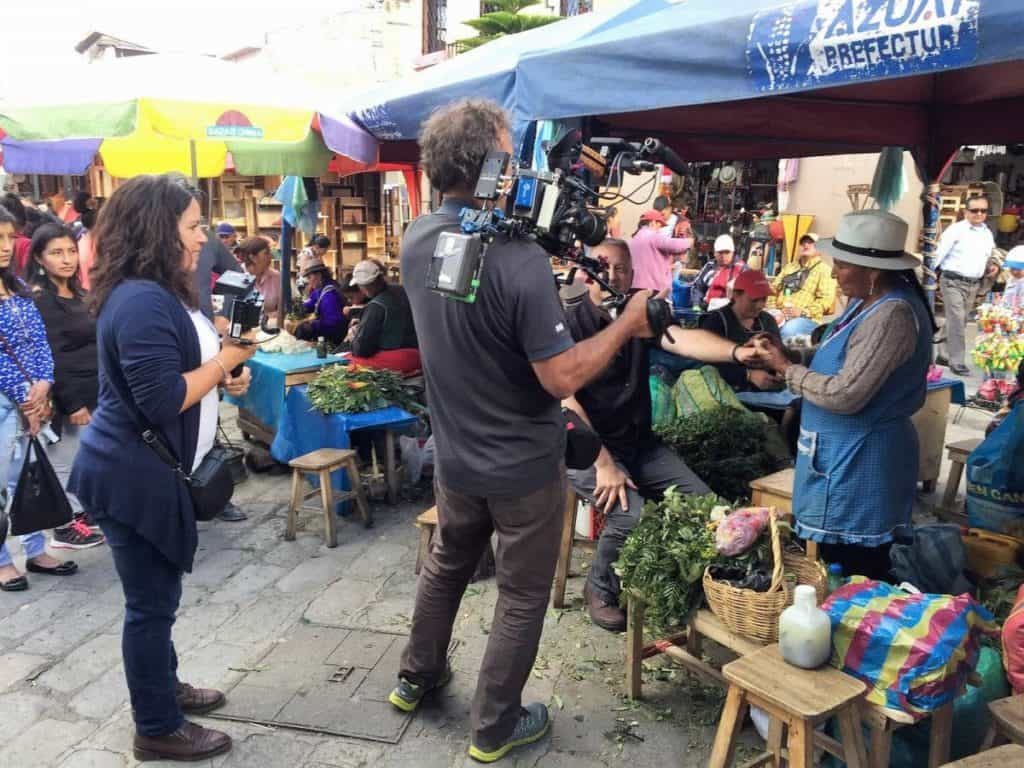 Some days we had to do a wardrobe change. Since we did not shoot the scenes in order to which they were going to air, we had to keep track of which of the four wardrobes belonged to that show scene day. While we are talking about scenes, I want to explain the filming. Each scene has to be filmed from every possible angle so that when the footage goes into post production, the editors can choose the angle that best fits what they want.  So let’s say Keith, and I are talking. They will shoot the first time with the camera on both of us. They shoot with the camera on just Keith and then they would do one on just me. If the Realtor was in the scene, we shot it four times. Once we said something, we had to remember what we said and repeat it.

We only shot 3 or 4 times if the ambient sound was quiet because besides a cameraman wanting his shots there is a sound man who wanted clear audio.  Some of the city shots required us to do them many times because before we finished our lines, a car came along, a horn honked or someone walked into the scene. They also shot multiple camera angles such as when we looked through an apartment and walked into a room, the first shot was always with the camera following us. Then we would repeat the scene, but this time the camera man was set up inside the room to catch us as we entered. Now you can understand why it can take 40 to 50 hours of footage to make a 22-minute show. 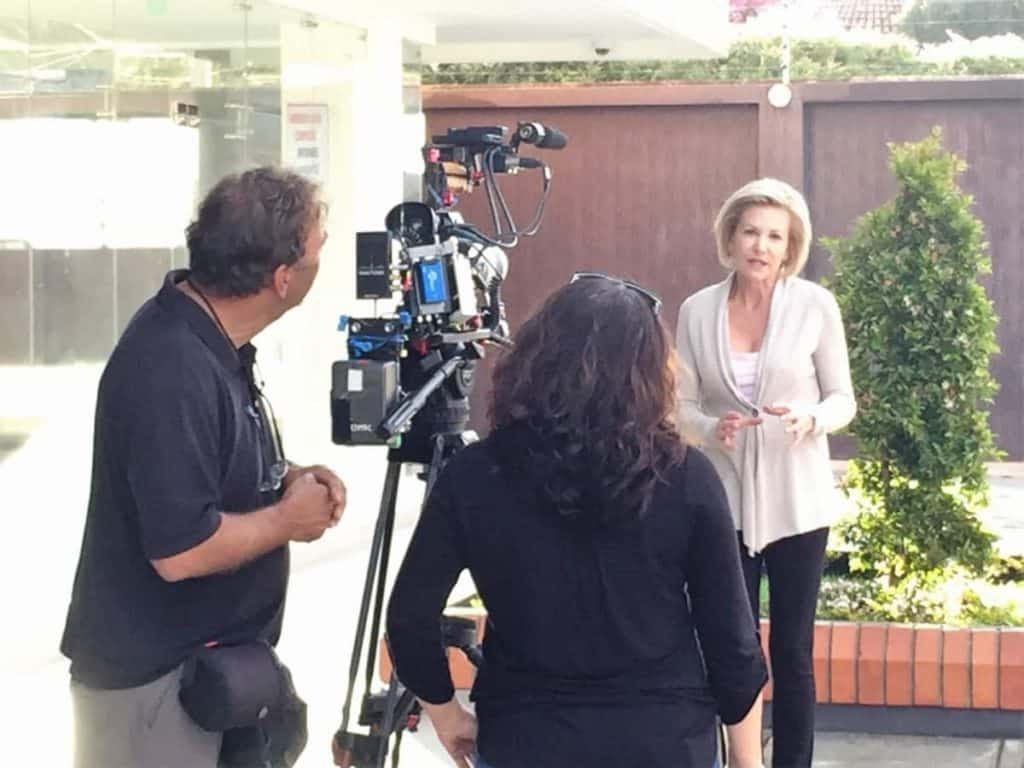 The next day we shot the carriage ride scene around the main square of Cuenca. The ride became the second most stressful day of this shoot. We arrived in the center of town and waited almost an hour for the carriage to come.  Considering that we are in Ecuador that was pretty good timing. I do not think the carriage driver thought himself as late. One of the reasons he was so late was that the horse drawn carriage had to be driven into the city. There were no trailers for the horse and the carriage. Since the House Hunters International filming, we heard that there were a few carriage rides observed in the past five or six years, but they were all probably for special events. There is no regular horse and buggy service provided in Cuenca at this time. 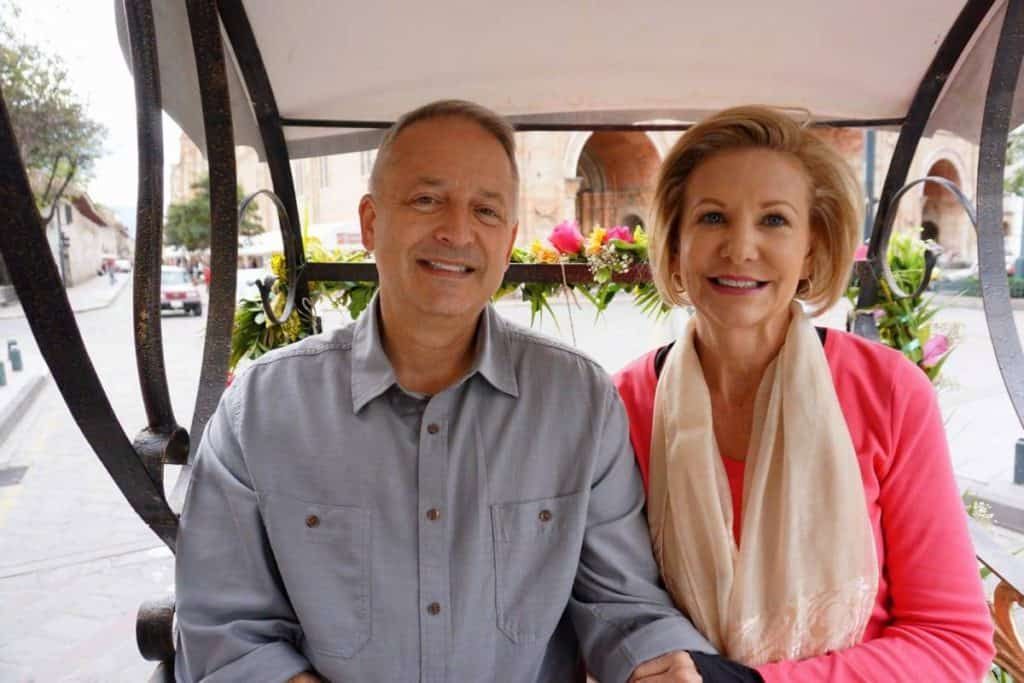 The carriage arrives decorated with beautiful fresh flowers. The carriage was black wrought iron with a white canopy to keep the sun off of us. The white, pink, and yellow flowers almost glowed against the black wrought iron of the carriage. If you have dreamed of taking a romantic carriage ride around an old colonial city, this would be your dream carriage.

More than Once Around the Block

The carriage ride went around a square city block so the camera man couldn’t just set up in one place and film. The first footage he took, he was in the carriage with us, sitting at our feet facing us. From there he would set up in different sections of the square to shoot us in a wide angle shot. Then he would pick up his equipment and run to the other side of the square to catch us as we came in that direction.  It was not easy; we had to shoot the scenes many times. We spent a few hours in that carriage going around the square about ten times.

Home number three was very cool. It had everything we were looking for. It was contemporary in design and it was smack in the center of El Centro (the colonial part of town). The biggest problem was that the closest place to get to grass that the dogs could use was six blocks away. The second and third problems were that this place was not available when we were looking for a place and it was not actually for rent it was for sale. The director made sure we did not see any part of this condo before we walked in.  They wanted to capture our expressions as we walked in because she knew we would like this one. I was at a jazz event recently and a lady came up to me and said. I bought the condo you looked at on HHI! 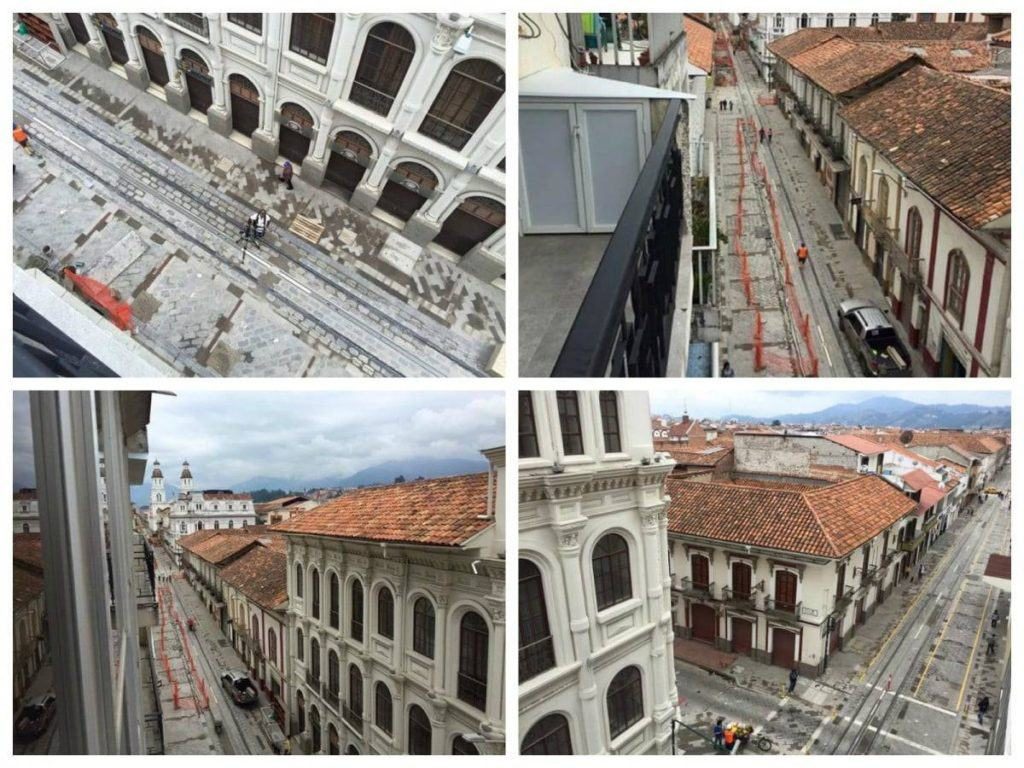 We got a custom-made Panama hat for Keith which took about a half day. None of that footage ended up in the episode. The people at Barrancos were wonderful. They created the exact custom hat Keith had in mind. I think this makes Keith’s third Panama hat from here.

On the last day, we return to Mansion Alcazar. Everything comes full circle. It was back at the hotel, in the beautiful yet cozy setting that we made our final decision. Big surprise, we chose the apartment we had rented ten months earlier. We went back to our apartment for some “after we moved in” footage which included Keith working on his new hobby of painting. We wrapped this all up by celebrating with some wine and dinner with the House Hunters International filming crew. 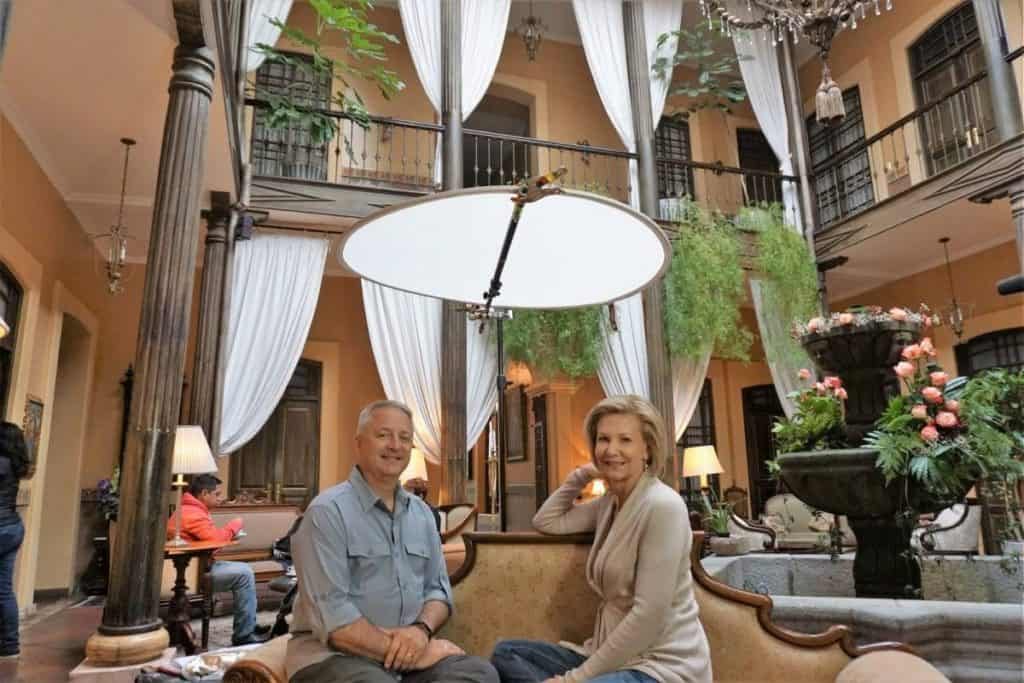 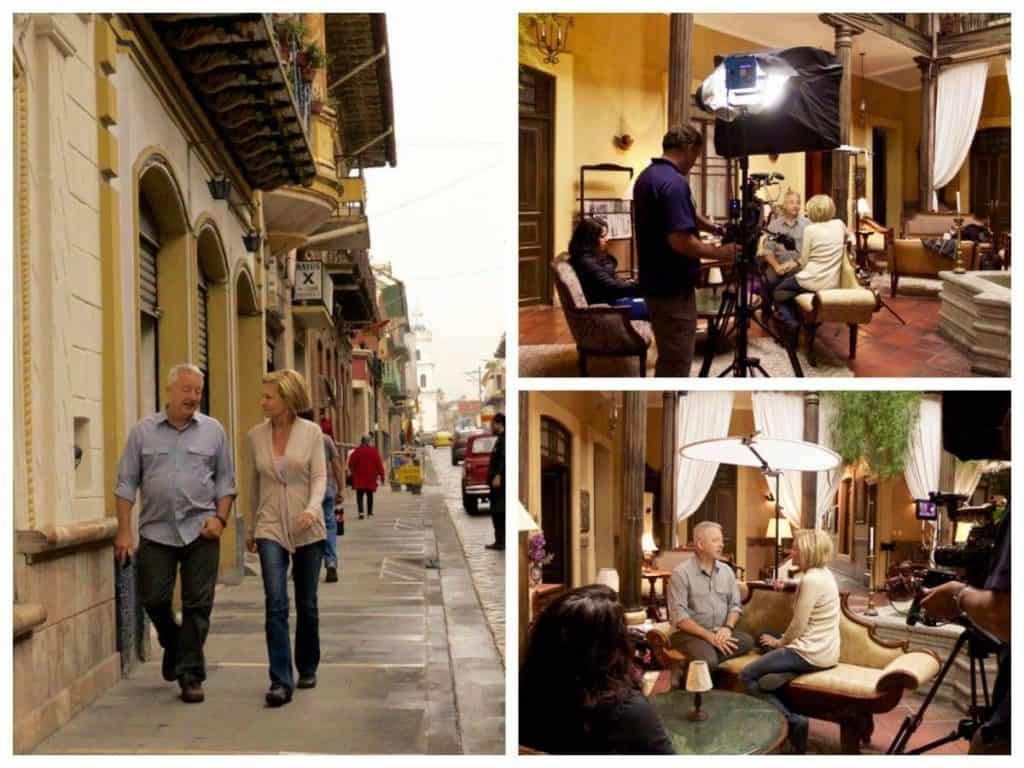 Hopefully, if you watched the show, you enjoyed it. We hope this behind the scenes post of the House Hunters International filming added to the experience. Consequently, if you were not able to watch the episode, you can watch it here. It's only 22 minutes (from over 50 hours of footage). 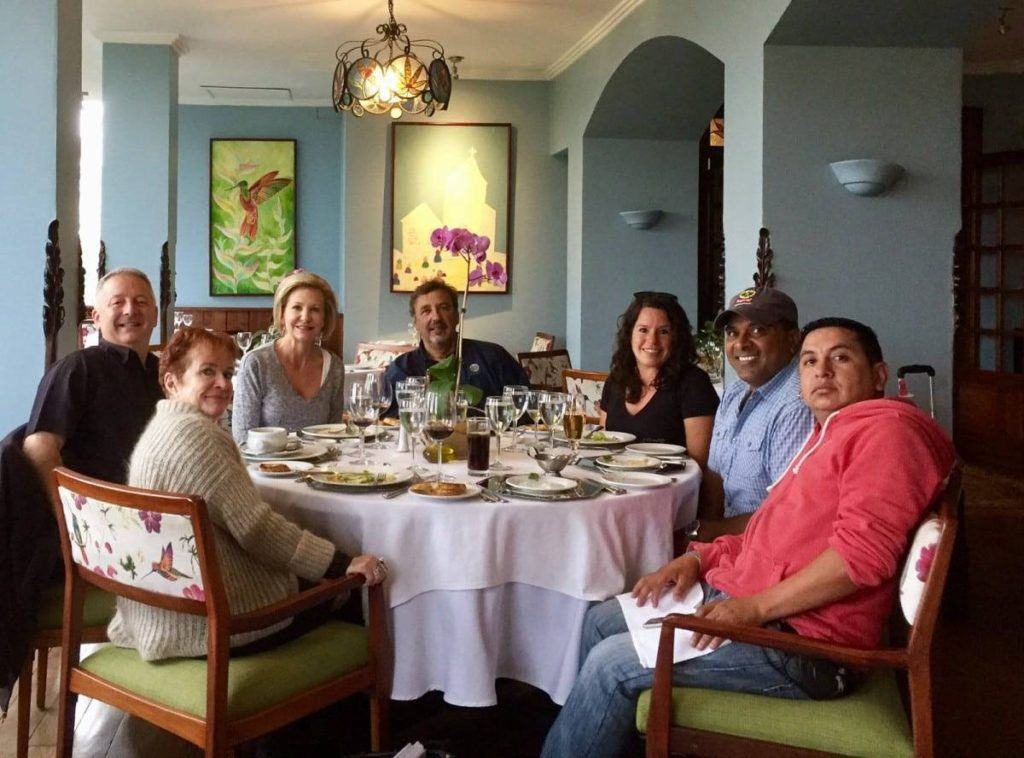 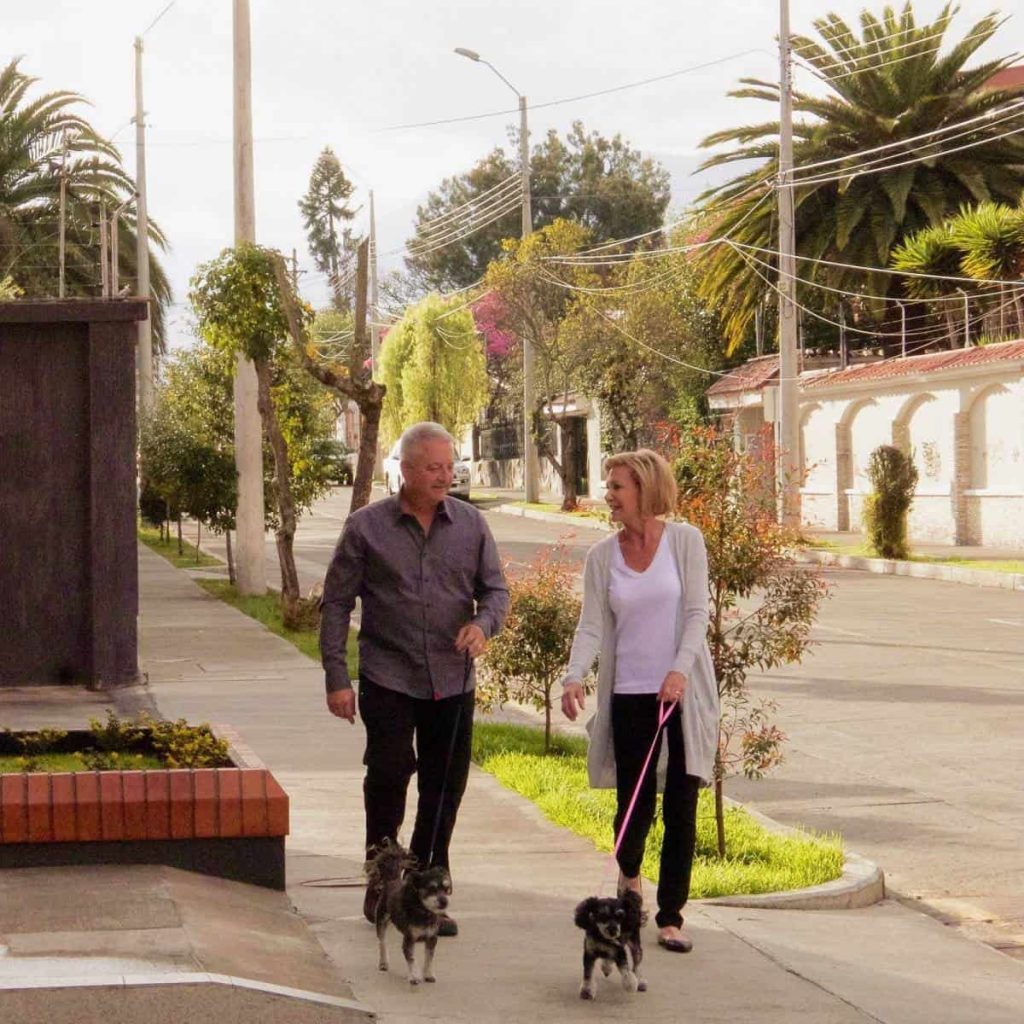 Here's a 15-second clip of a behind the scenes shoot of the House Hunters International filming.  If you didn't read the first post that talked about how we got selected for House Hunters, you can read it here.