Many Americans dream of visiting the engineering marvel of the world, the Panama Canal. It's no wonder because it's one of the Seven Wonders of the Modern World. The only way to truly comprehend this amazing feat is to experience it first hand. Keith and I recently took a Panama Canal cruise. Before dawn, dozens of passengers crowded onto the ship’s bow to watch its arrival into the Panama Canal. As we got closer to the canal, all we could see is lush greenery on both sides of the canal entrance, much like a rainforest. Soon, a Panamanian pilot came aboard and took control of our ship. One of the only times at sea that a captain surrenders control of his ship is to transverse the Panama Canal. 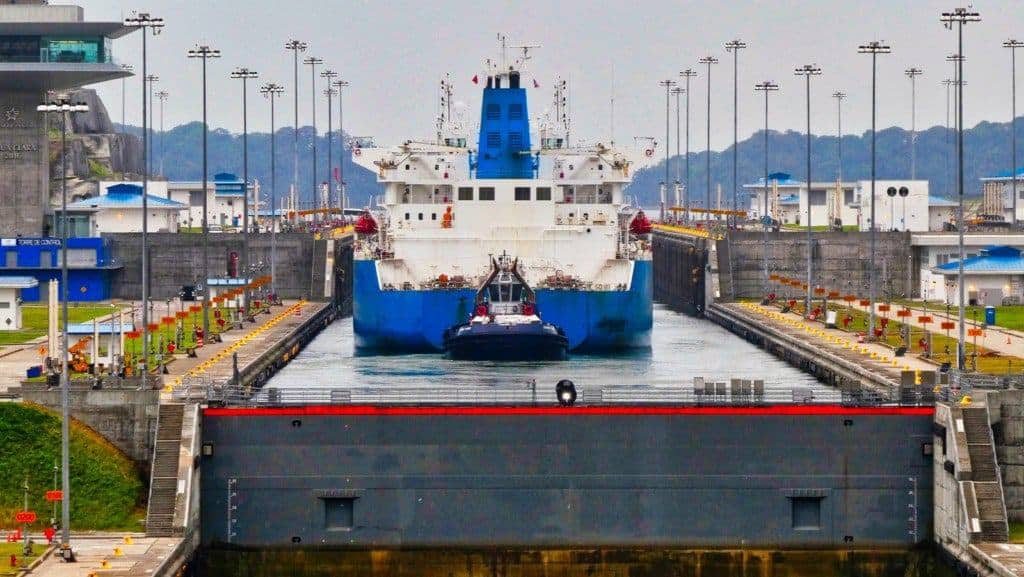 Keith and I arrived on the front deck early in the morning with maybe 30 others of the 3000 passengers on our ship. As we entered the canal, the sun began to rise. It was still cool but humid, and now the deck was full and people were positioning themselves to get the best photos of this day. 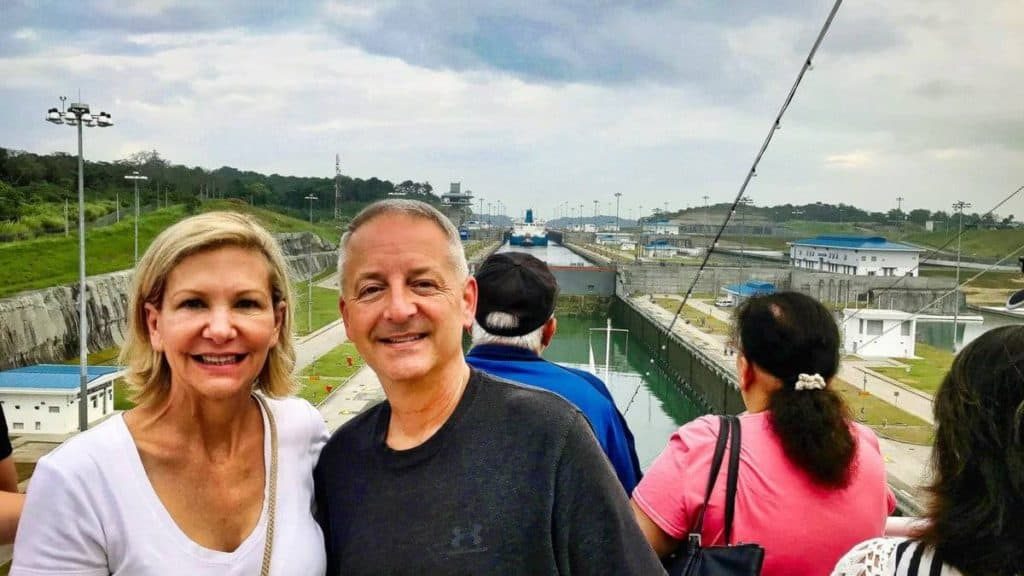 Our ship had just six inches of clearance on either side as we enter the canal. The Panama Canal is a 51-mile long artificial waterway created to connect the Atlantic Ocean with the Pacific Ocean. They use water from the man-made Gatun Lake to raise and lower ships through a series of locks between the two oceans. Since the construction of the Panama Canal, million of ships from all over the world have made the passage. Ultimately, this results in drastic reductions in travel time and saves the ships 8,000 miles of travel. 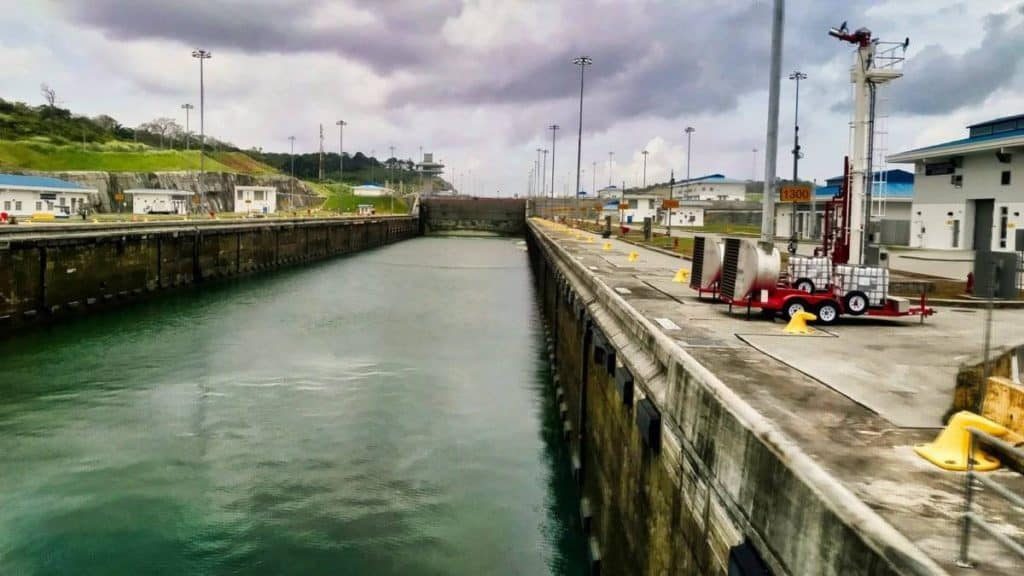 There were a couple of failed attempts to create a shipping canal through Panama during the 1800s. The Panama Canal of today built by the United States beginning in 1904 save ships a lot of time. Designed to reduce the amount of time cargo ships took to navigate between the Pacific and Atlantic oceans it is valuable to all. The canal construction was a tremendous task. The US decided on a lock system that could raise ships to a new man-made lake and then lower them back to sea level on the other side. Ultimately, construction was difficult going through the mountains. But diseases like yellow fever and malaria killed many workers before the completion of the canal in 1914. 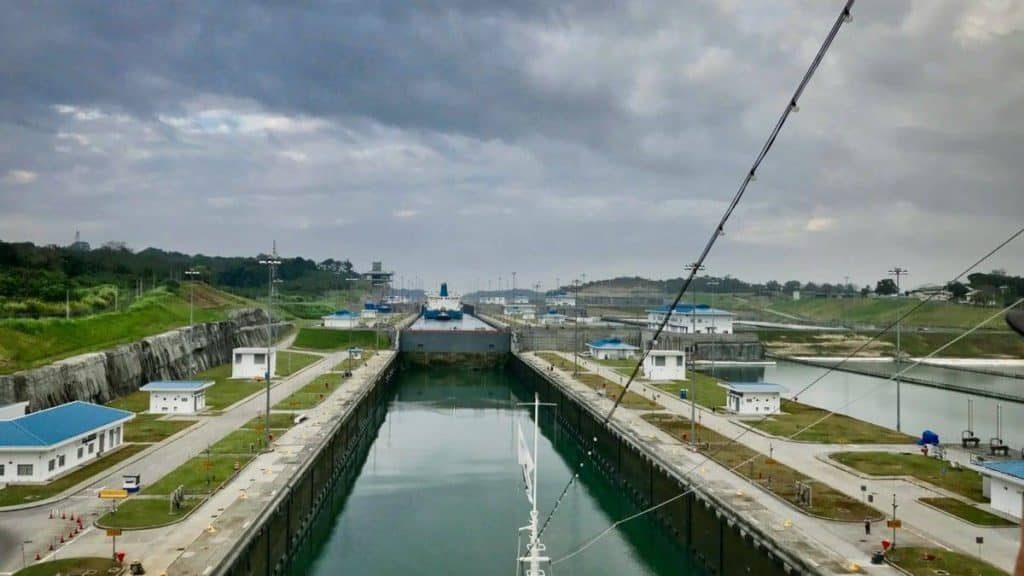 The Panama Canal is a series of watertight locks (a confined section of the canal). It relies on physics to raise ships from one ocean to 85 feet above sea level before lowering them into another ocean 51 miles away. Each lock chamber requires 26,700,000 gallons of water to fill it from the lowered to the raised position. So, gates hold the water back from one lock to another. These gates are enormous, ranging from 47 to 82 feet high, and are 7 feet thick.

A ship enters one of the locks, and a large lock gate closes behind it. The lock fills with water until it reaches the level of the next lock. At that point, the front gate opens, and the ship moves to the next lock. In the middle of this system is the man-made Lake Gatun. After crossing the lake, the ships enter locks on the second half of its journey. 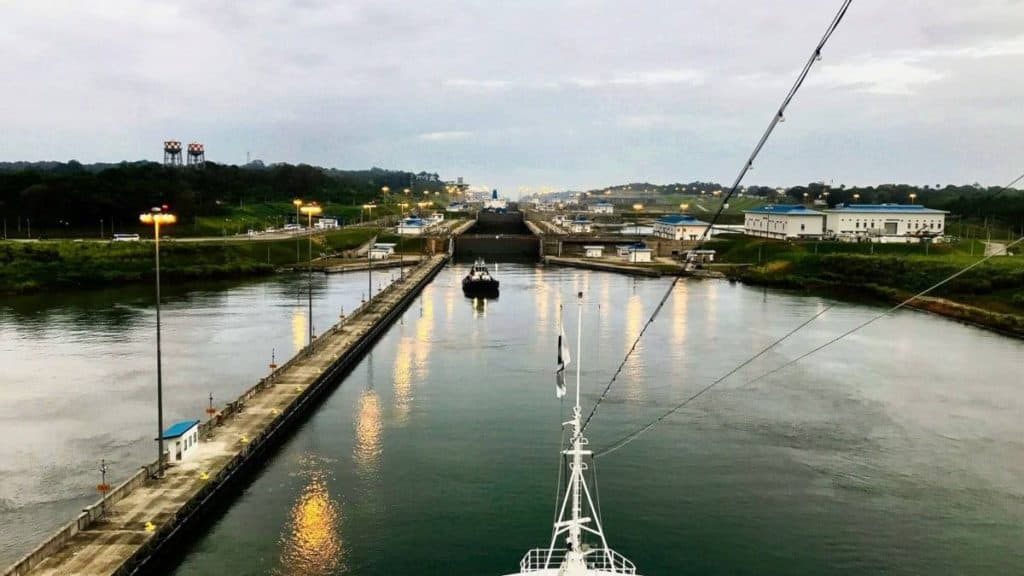 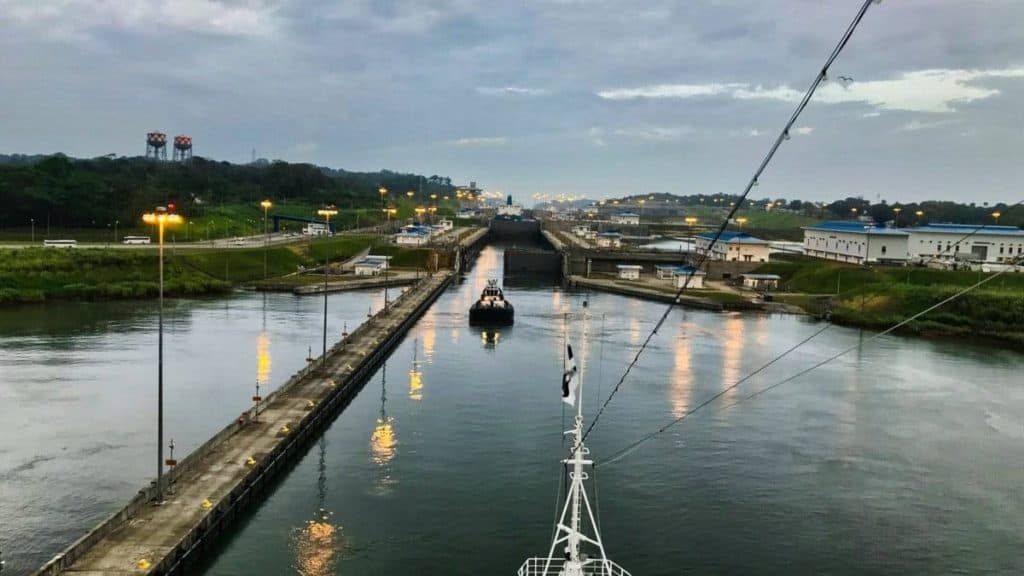 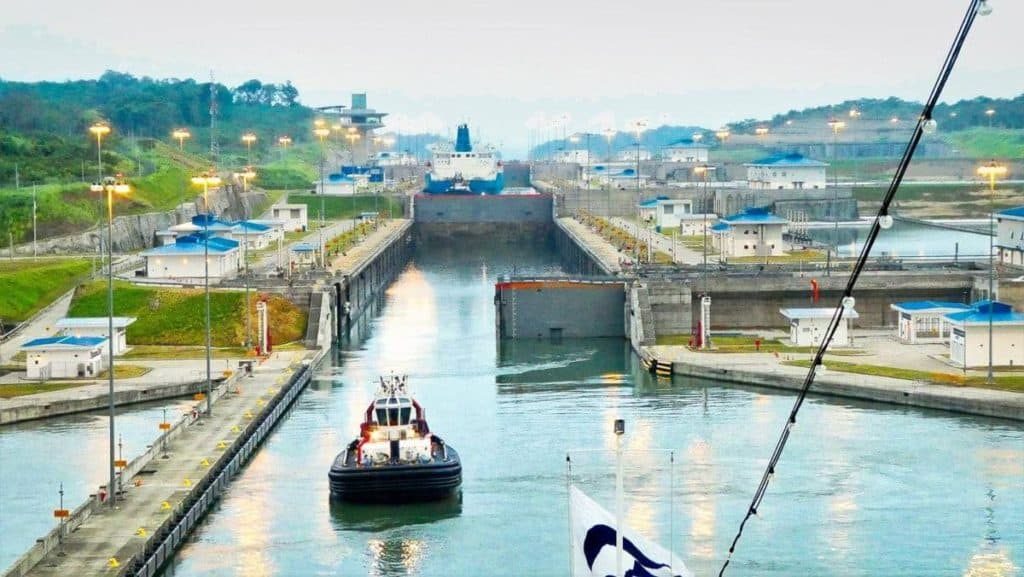 Keith and I took a cruise to witness this made-made wonder. Our ship entered from the Carribean and turned around in Lake Gatun and made the same journey back out to the Atlantic ocean.

The canal is open all year, 24 hours a day. Ships can enter from the Atlantic or the Pacific side. Ships enter the canal on a first-come, first-serve basis.

Being on a cruise, we had the option to take a tour, and we decided that we would visit old Panama City or Panama Viejo in Spanish. A tender took Keith and me from the ship to the pier. At the pier we met our guide for the tour. We rode along the Amador Causeway to Panama Viejo (Old Panama). In its beginning in 1519 Panama City was an important port for treasure-laden Spanish ships. Panama Viejo is where the main city originally stood until destroyed by a band of pirates under buccaneer Sir Henry Morgan in 1671. 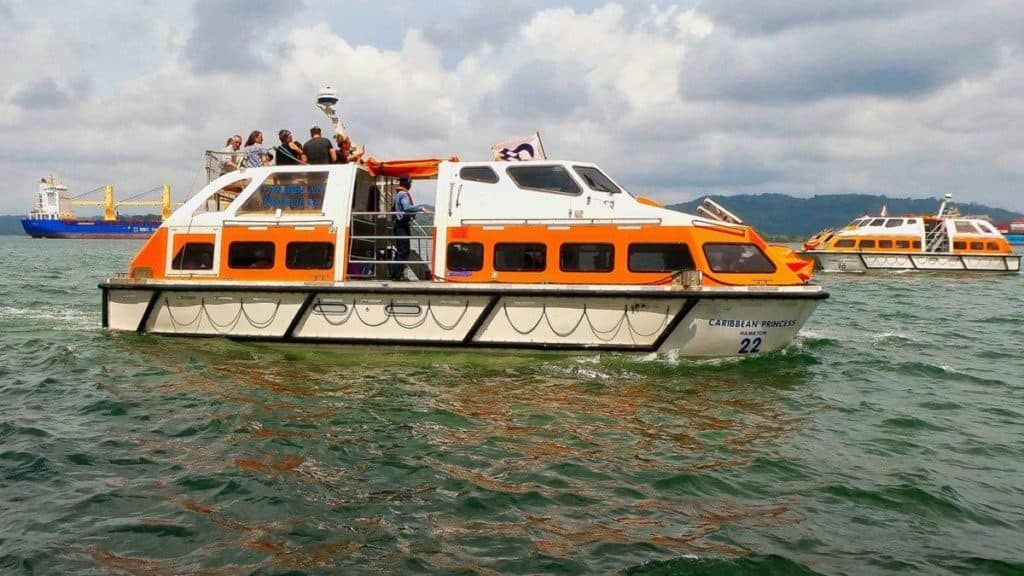 Located in the modern city of Panama is The Panama Viejo Historical Monument Complex. Otherwise known as the Panama Viejo Archaeological Site. The site includes the ruins of the first European settlement on the Pacific Coast of the Americas and artifacts of the first inhabitants of this Isthmus. 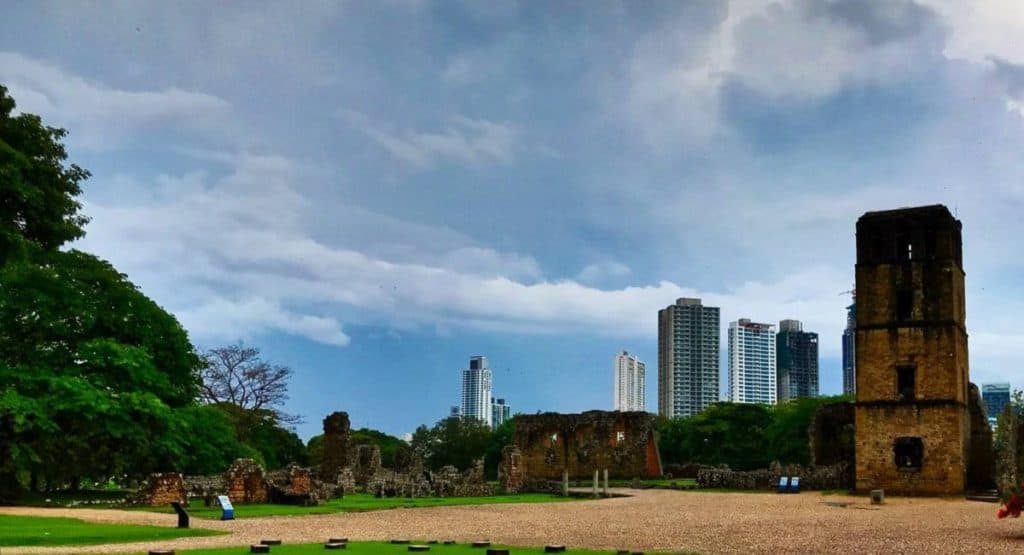 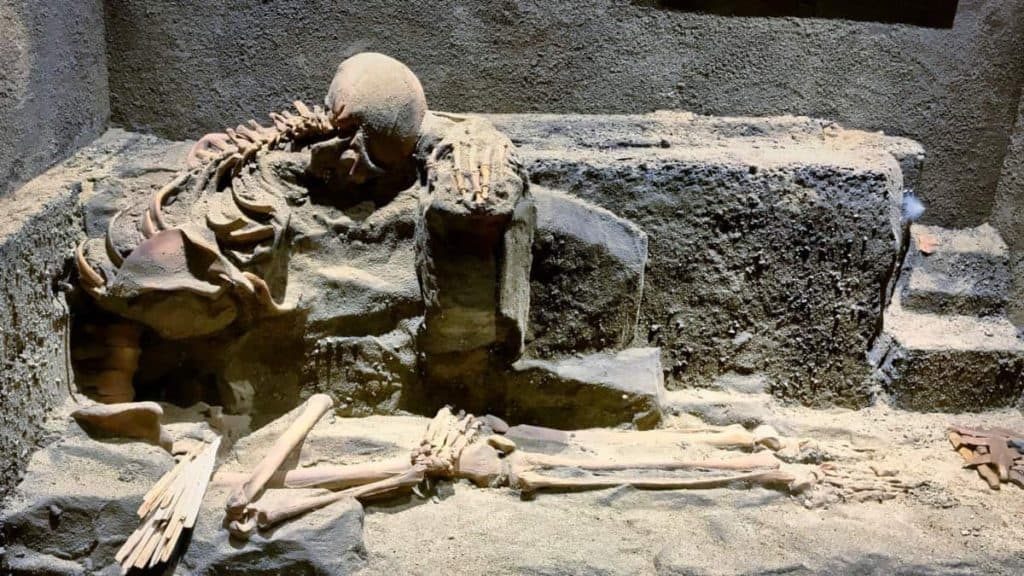 Once in Panama Viejo, our tour of the old city began. We learned of Panamanian history and legends. Of particular interest was a stop at El Arco Chato or in English the flat arch. As soon as the Dominicans settled in Panama, they built a church and a convent. The Arco Chato is the ruins of these. Arco Chato was an example of the typical architecture of the period, the façade still showing where the towers rose. Near the main entrance, is a brink arch, spanning a space of 50 feet. For years, maybe centuries engineers declared that no arch so flat could remain in place without the mechanical aid of some kind. In short, when the removal of the ruins began in 1913, the arch was examined. It was found to be a genuine construction of sole masonry. 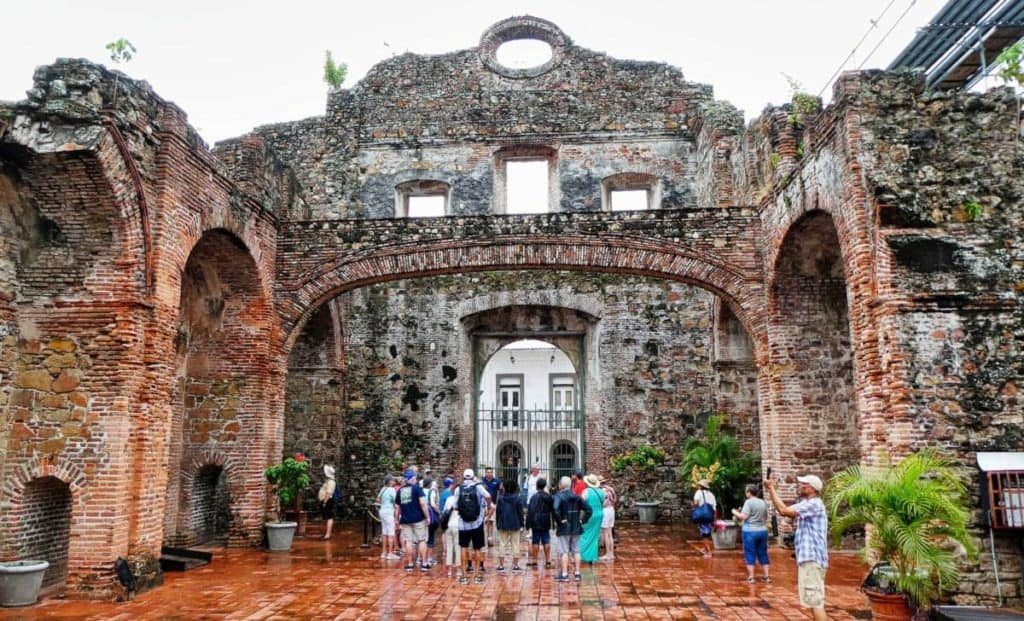 There is a charming legend that is attached to this arch. Legend has it that a friar who directed the construction of the church in Panama Viejo had the arch built where we see it standing. Sadly it fell. Erected in the same place was a slightly different second arch, and it fell again. So, it was then that the friar prayed for guidance. In a vision, it was revealed to him just how to construct the arch. The third time, he placed the stones with his own hands as we see them today and achieved an architectural triumph. Most importantly, the arch has remained intact, even resisting earthquakes.

We loved Panama Viejo and wished we were staying a few days. The buildings are colorful, and the streets immaculate. There are many charming shops and a variety of one of a kind restaurants to try. Keith and I had a glass of wine in a little French bistro. Our server was Venezuelan, and we chatted and compared Ecuador to Venezuela. 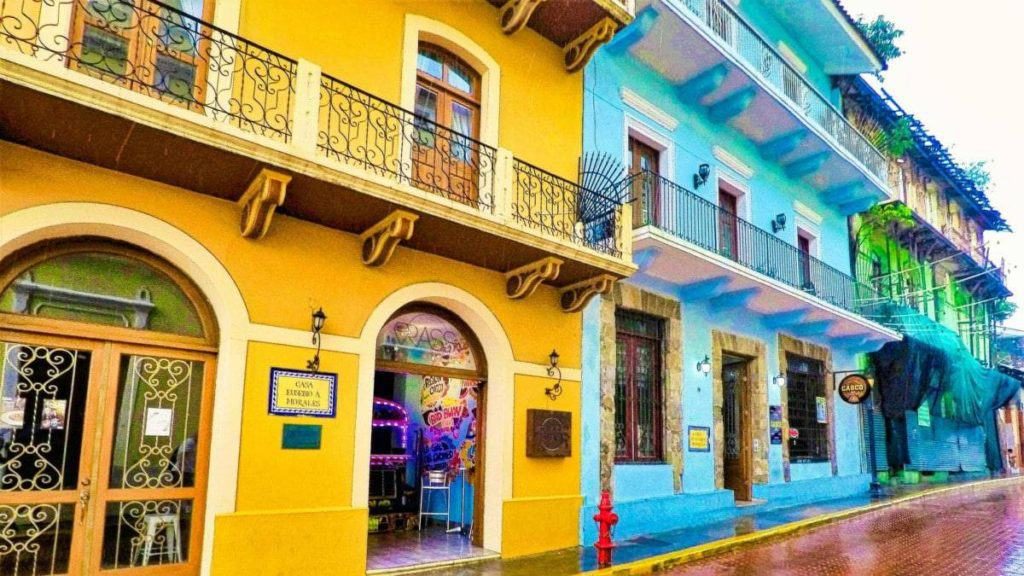 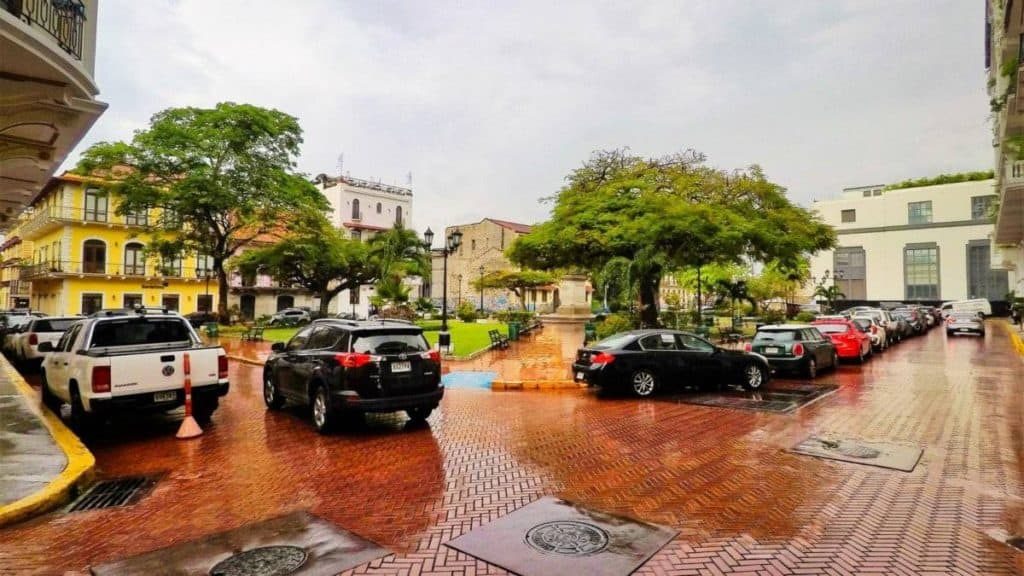 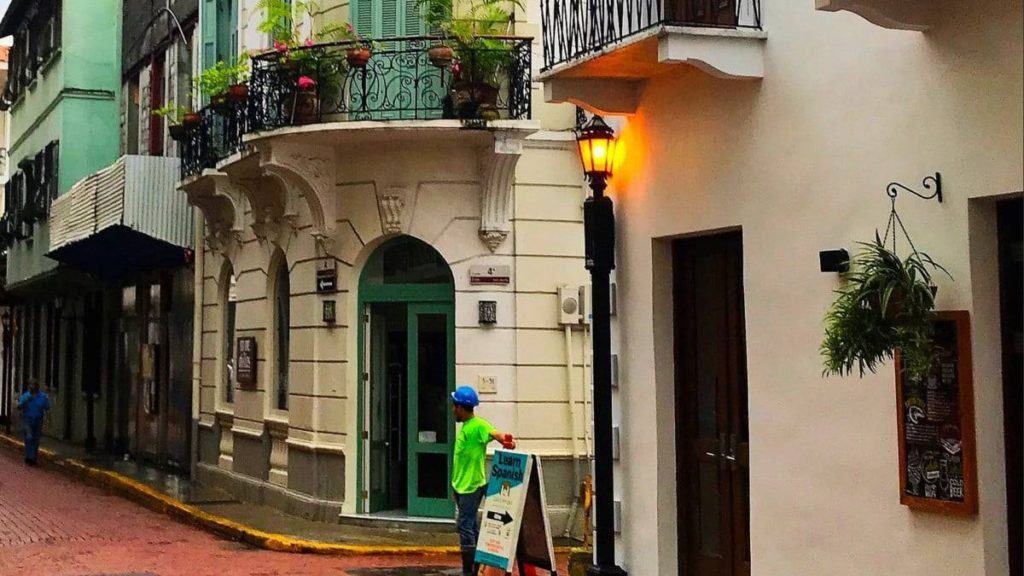 One of the world’s greatest man-made marvels, the Panama Canal stretches from Panama City on the Pacific side to Colón on the Atlantic side, cutting right through the continental divide. Thus, the trip takes between 8 to 10 hours and costs on an average $150,000. Seeing it first hand is an amazing experience! 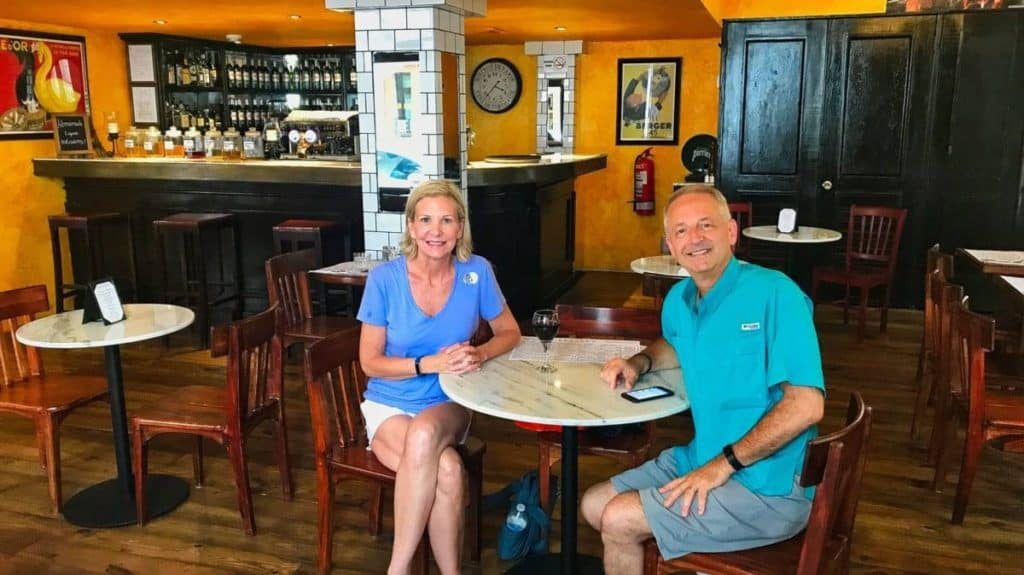 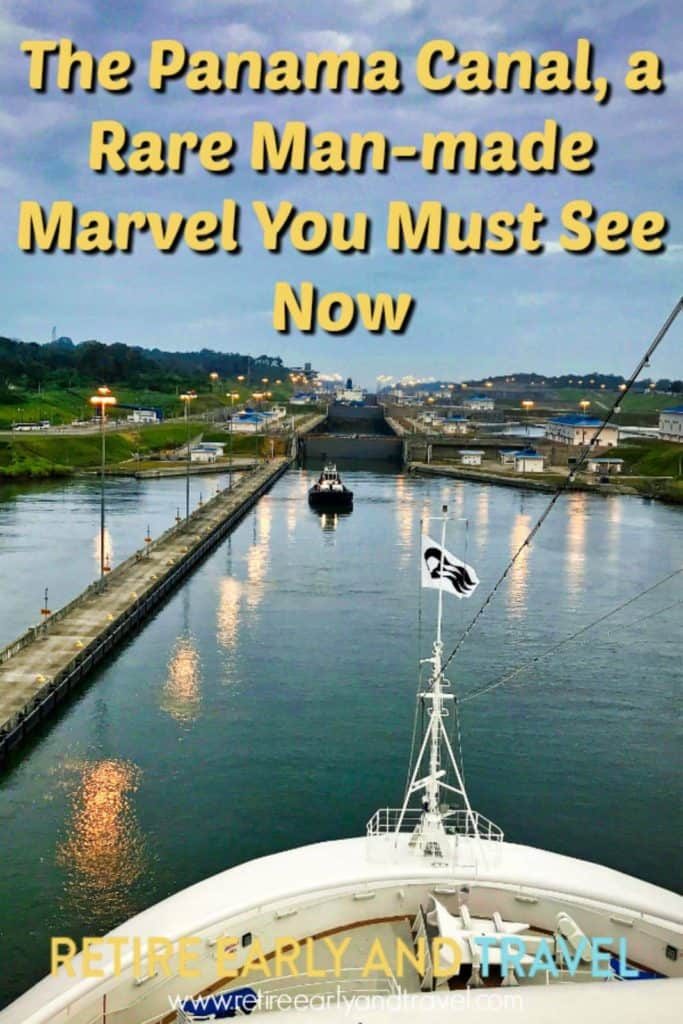 42 thoughts on “The Panama Canal, a Rare Man-made Marvel You Must See Now”